It has been a month since I last visited Harlow. Exploring the Water Gardens virtually I feel a comfortable familiarity, viewing artwork I often encountered on my previous trips to the Gibberd Gallery. Searching posts on the Facebook page ‘Photos of Harlow New and Old’, I click on beautiful pastel photographs of the Water Gardens in the 1960s. The comments beneath tell of the “good old days,” lunchbreaks spent drinking pond-cooled beers, fish watching, and occasional fallings in. A town hall where couples met and married, but concrete cancer killed. I try to think of a word that sums up the nostalgic sentiment of these posts, and in doing so I end up discovering a new one.

I ask a Brazilian friend about the word saudade, and he tells me the Portuguese word doesn’t really translate into English. He suggests the description “a deep nostalgic feeling triggered by something special”. I find other suggestions, “missingness”, “the love that remains” and “the sadness of missing something but the happiness that you got to experience it”. Portuguese scholar Aubrey Bell in his 1912 book In Portugal, descibes saudade as “a vague and constant desire for something that does not and probably cannot exist, for something other than the present.” But the most common definition that I find is “the memory of something with the desire for it.”

I think about this word as I long for the life I was living two months ago, the walk to work with an audiobook in my ears, the company of friends in a cosy pub, the joys of having materials to hand in my studio, Monday to Sunday defined with activity, rather than days blurred into sameness. But this current life contains joys that were absent two months ago. As I wander virtually through Harlow’s Water Garden, I resolve to delight in the things that I was missing then and have now. My family, my dog, and my very own water garden, a larger, wilder, coastal version, and the crisp-breezed spectacle of looking out to sea.

The day I write this happens to be April 21st, the birthday of a good family friend. We normally live in different countries, but today we are less than 2km apart. My younger sister and I agree something special must be done to commemorate the occasion at this time of limitation. We settle on a jolt to everyday monotony, a little startle in our lock-down stupor in the form of an icy dip in the Irish sea. We walk down to the seaside and keep our distance. I chicken out and mind the bags, phone poised to document. Two metres separate but together friend and sister wade in, numb feet. A push off from the sand and they are submerged, a successful endeavour. Shivering they stumble out, quick to wrap up in a towel and stand in the place where a sunbeam comes around the corner.

Later, I sit and write and think about them as two ‘Freezing Cold Fridas’, triumphantly emerging from a sea a season behind. 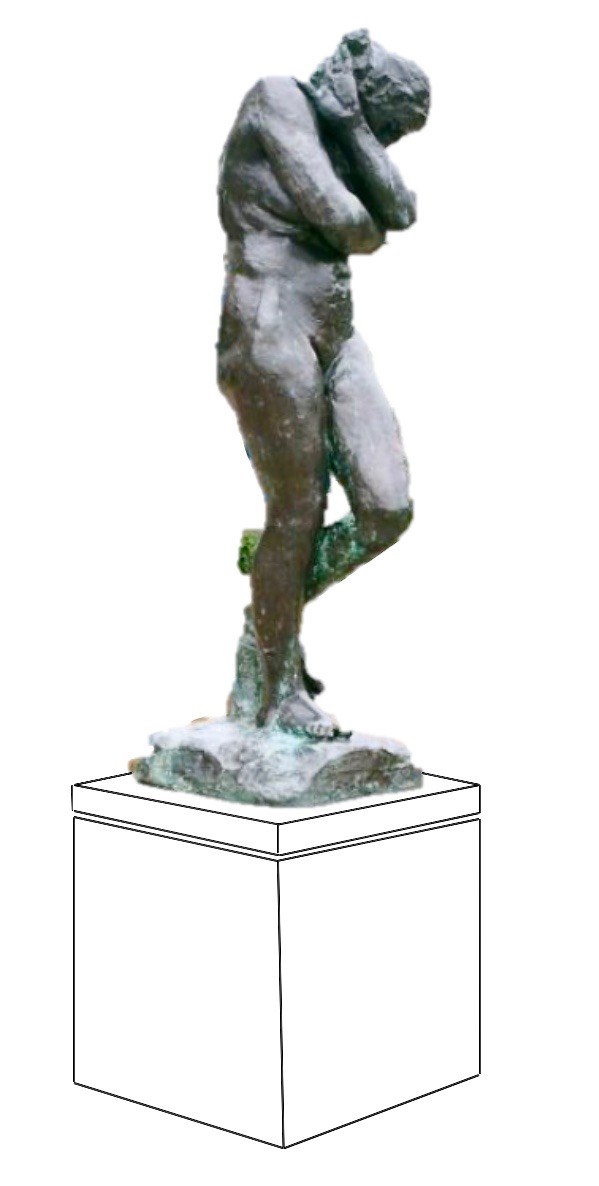 Eve by Auguste Rodin The sculpture has earned the nickname ‘Freezing Cold Frida’ on account of its appearance in wet and cold weather. It is located in The Water Gardens, Harlow Town centre.

Winter in the spring: “The sea is always a season behind” Claims my sister Grace on the walk back from the beach. 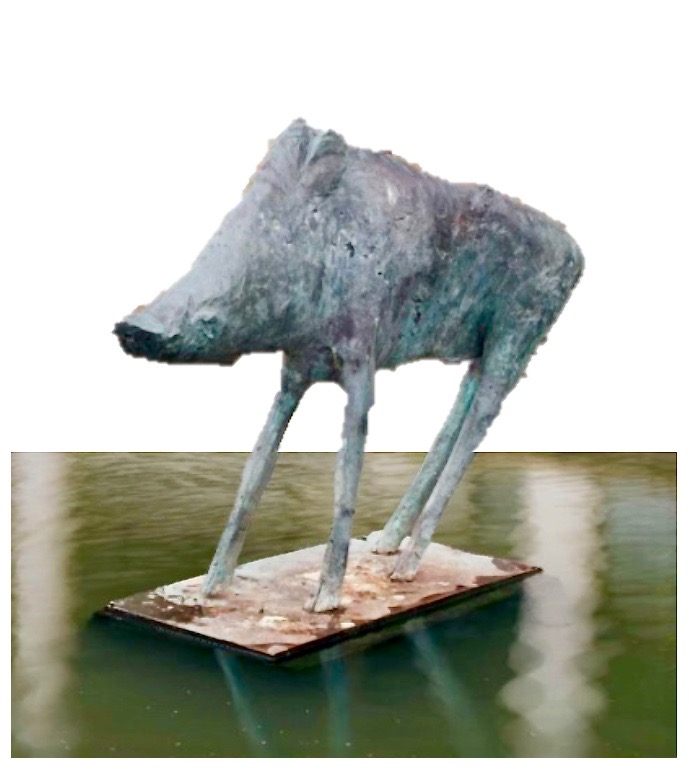 THE DOGNESS OF DOG

I never look at Elisabeth Frink’s Boar as an imposing or comedic character, but one that seems to express an affable sort of nature, like a childhood imaginary friend. It stands moated, almost appearing to float on the surface of the water, an unnatural habitat for the creature, it behaves like an image out of fairy tale. While researching I discover Frink also made an illustration of the classic myth of Circe, surrounding the enchantress with the boars she had transfigured from Odysseus’ men. I find the appearance of Boar in this context unsettles me because ever since I first visited Harlow, I’ve felt a great fondness for this sculpture. Perhaps it’s the straight-legged back lean, the suggestion of withdrawal before a playful pounce that reminds me so much of my family’s shaggy dog Eva. But even more, it’s the image of her standing at the water’s edge as the tide comes in. She won’t swim, but she submerges her legs until they become scruff-flattened skinny sticks disproportionate to the heavy body they support.

Elisabeth Frink was said to have three essential themes in her work: “the nature of Man; the ‘horseness’ of horses; and the divine in human form.”

“Dear diary, after 1562 days of begging my dear human not to leave, not to ever leave, he has finally listened. Most of my day’s now spent staring at him, following behind him at the distance of one and a half feet, lest he ever fall. It is truly heaven and I pray it will stay like this forever.”

On the same beach, just beneath the surface lies a water garden, one I have only happily discovered this month. It must have been there my whole childhood, on every disgruntled march led by mum (who naturally kept two metres in front, even then). A landscape, hidden just out of sight, only visible at lucky low tide moments. The sea pulled back to reveal hundreds of huddled rocks, hairy with rubbery seaweed. Surprising me with an extra bit to a place I thought I knew.

Viewing William Mitchell’s Relief sculptures, I see them in the same sort of way. Like an island’s topography rendered in stone, they sit in blueness. I imagine them as a lost past that the tide has pulled away from to reveal. The surface of Mitchell’s artwork protrudes and sinks through geometric form. The rounded thumb-formed shapes parallel with the limpets and I find clinging to the rocks on the beach. Like the boulders, these artworks feel very much part of their environment. In researching Mitchell’s cement murals, I learn why this is, his background as an industrial designer helping him to produce artworks that sit within the 1960s architecture of the Water Gardens. These reliefs are the gargoyles of the era they were produced in; they do not use architecture as a backdrop, but instead form the landscape of place. 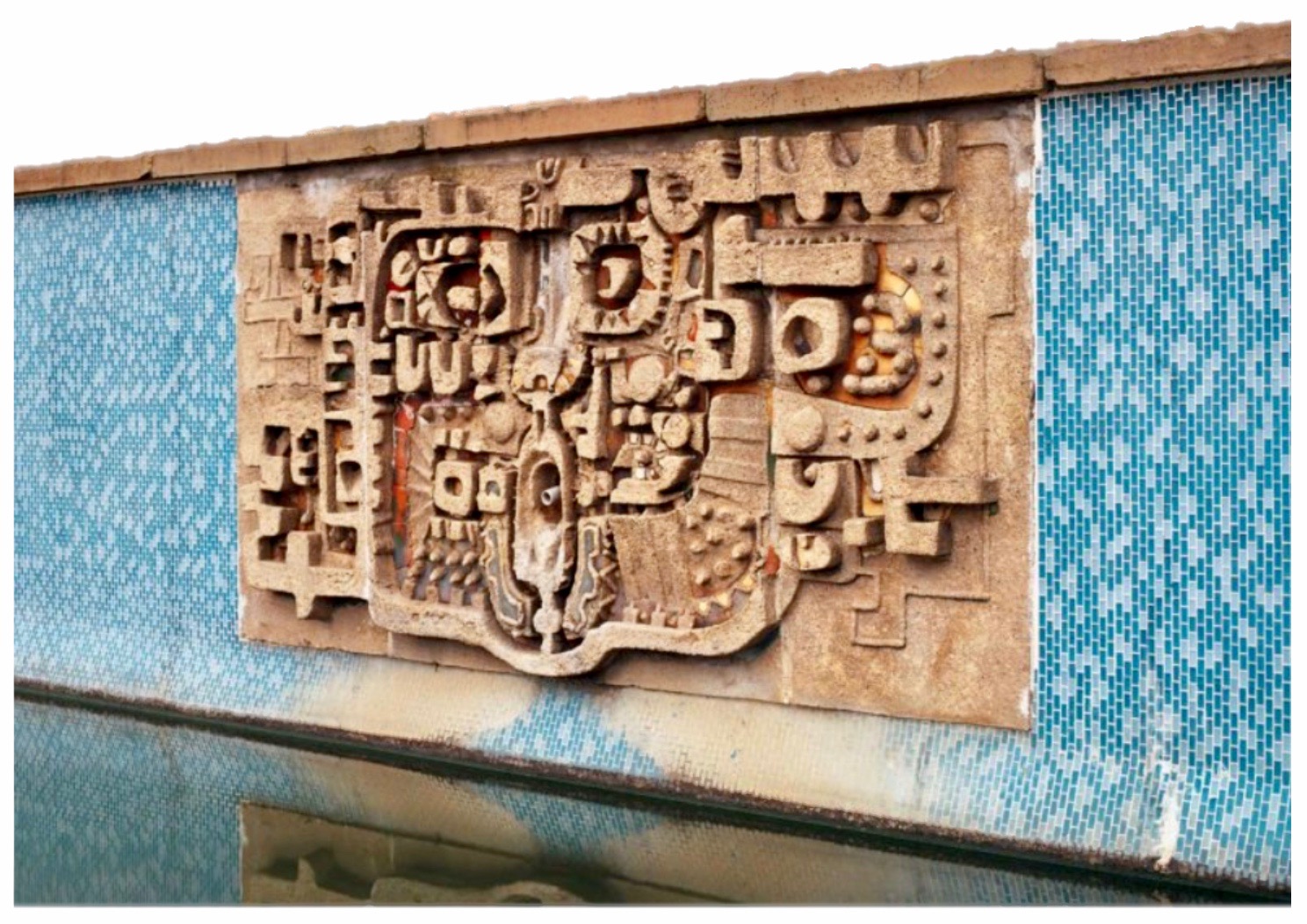 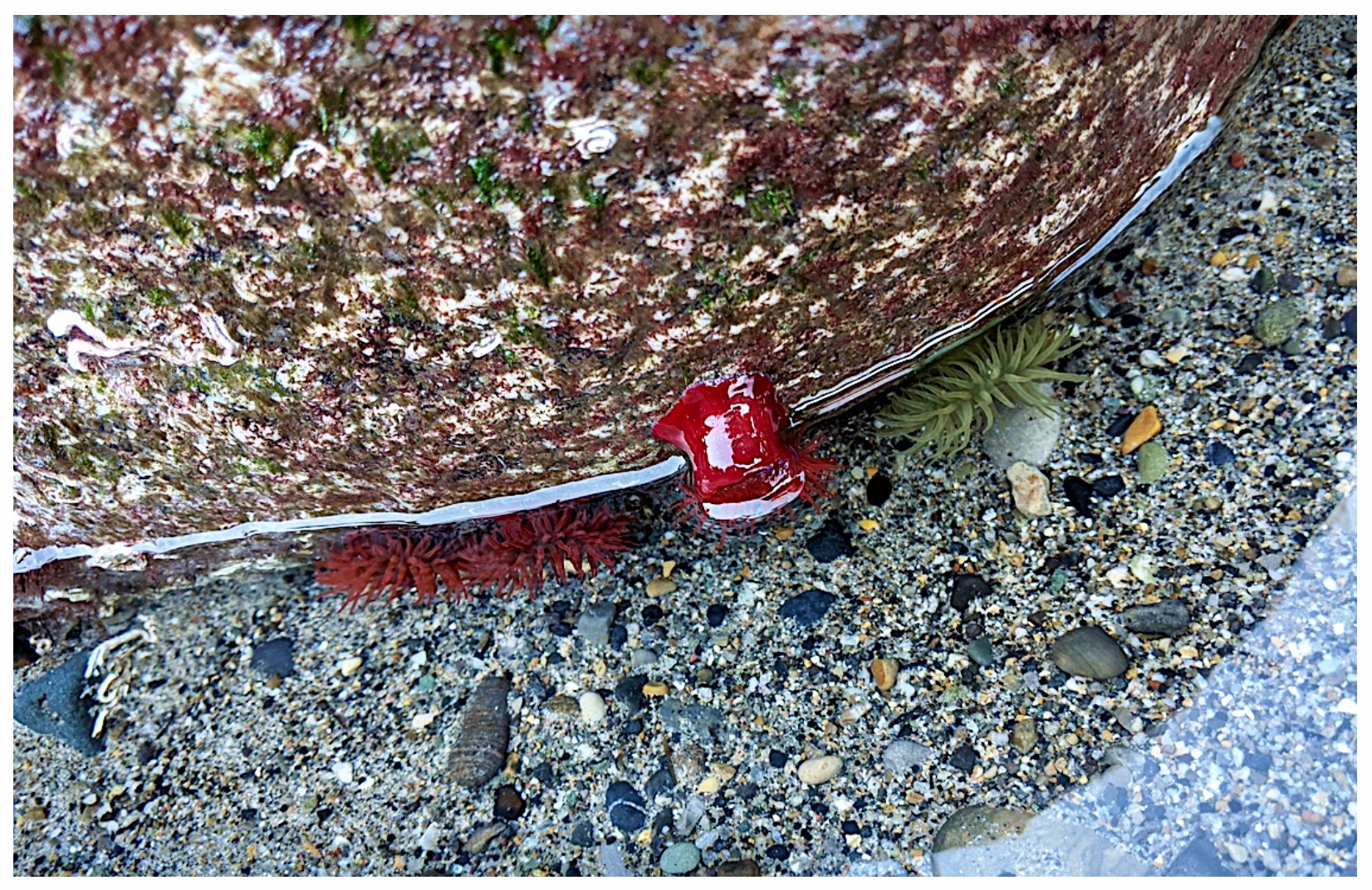 Trying to keep my balance I move amongst the slippery rocks. Spotting a tide pool, I indulge in a favourite childhood activity. I peer in and find a gem of a creature. The Red Beadlet Anemone clings above the waterline, a melty cube of jelly, masticated wine gum. Bellow the waterline and it unfurls itself, petals out, the quickest blossoming flower.